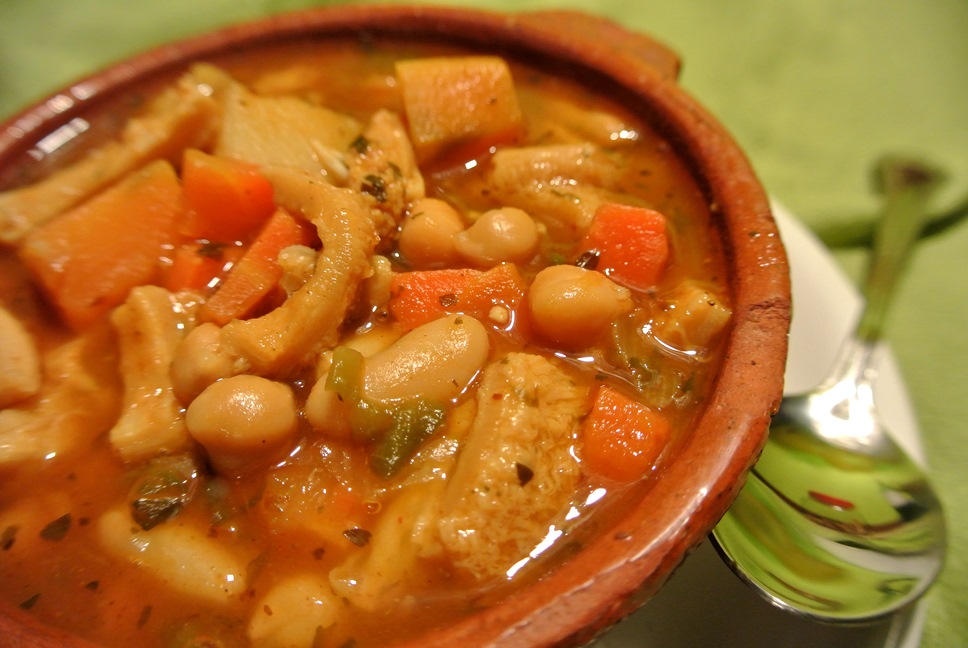 Mondongo Soup is one of those polarizing foods that you encounter where you either love it or hate it. There’s no in between when it comes to Mondongo, which is what makes it a unique kind of food to cover in this month’s edition of cuisine spotlight. The main ingredient of diced or pieces of Tripe (the stomach entrails of a cow or pig) cause some folks to go nauseous while others salivate over the chance to get a big bowl of mondongo for their lunch or dinner.

However, Mondongo is more than what meets the eye and comes with a number of different ingredients that vary depending upon which country or part of Latin America you find yourself in. Part of what makes Mondongo an interesting food is that you can find it in more than one country and each place makes it a little bit differently than the other. I didn’t know Mondongo existed before I started living in Colombia and although I tried it once and enjoyed it, I’m not big on tripe in general while others love it very intensely. Even if you find yourself disgusted by the idea of eating cow’s stomach, perhaps you’ll reconsider after reading this article.

Mondongo is more than just beef or pork tribe. The main ingredients also include various vegetables cut up and chopped such as bell peppers, onions, carrots, cabbage, celery, tomatoes, lettuce, etc. Additional ingredients can include salt, pepper, coriander, garlic, oregano, and cilantro if you want to spice up the dish with some seasoning. You can also decide to add some corn and rice to the soup if you want to make it more heavy, and filling.

Usually, the tripe is soaked in citrus juice or sodium paste before it can begin cooking in a pot. If there are many types of spice or seasoning available in your local supermarket, you can make your Mondongo as bland or as zesty as you see fit. The great thing about a soup like Mondongo is that there is a lot of variety in making it and there’s no right or wrong way to make it. It would be quite a dish to make when you haven’t eaten all day and are ready to dig in after a long day at work.

Mondongo is a food dish most commonly found in Latin America, the Caribbean, and the Philippines. When it comes to the specific countries in which you can try Mondongo, there are quite a few that have it available. That list of countries includes Brazil, Panama, Puerto Rico, El Salvador, Venezuela, and in Colombia.

In Colombia, Mondongo is a traditional dish for Lunch and is made with a lot of cilantro and is known for having a lot of chicken or beef broth for the vegetables and tripe to soak in. Peas, Carrots, Onions, etc. are the most common vegetables for this type of Mondongo and corn is sometimes added to the mix. In addition to pork and beef tripe, chicken and turkey tripe is sometimes used in the Colombian version of Mondongo depending upon which region of the country you are in.

Mondongo is sometimes known as ‘mocoto’ in Brazil as the Portuguese translation of this popular soup dish. Mondongo is mainly consumed in the southern regions of the country but can also be found in the Northeast where it is known by the name of ‘dobradinha’ when it comes to Panama, Mondongo can be seasoned with pieces of chorizo or pigtails to create some added flavors. Pig knuckles, and feet can sometimes be added to Panamanian Mondongo as a substitute for pigtails or chorizo.

This type of Mondongo can also come with chickpeas; bay leafs, and is served with salads and/or plantains. There is also a tradition in Panama that some folks observe that when a new house is built for a family, they will gather together to celebrate the occasion and have a meal known as ‘mondongada’ that focuses on eating big servings of Mondongo.

In Puerto Rico, vegetables such as squash, pumpkin, eddo, cassava, capers, etc. can be added as well as the salted pork tail and feet that you can also find the Panamanian version of Mondongo. Lemon juice is the main ingredient that helps to distinguish the Puerto Rican version of Mondongo from other countries’ versions. For El Salvador, Their Mondongo is also called the ‘sopa de pata’ where chili powder, coriander leaves help to give it a spicy kick on top of the tripe, pieces of yucca, sweet corn, green beans, and plantains that make up the soup. Lastly, the Venezuelan version of Mondongo is often the only meal of the entire day due to the fact that it is very heavy compared to other kinds of Mondongo.

This kind of Mondongo is served with plenty of vegetables, different types of tripe, pigs’ feet, and seasoning but also comes with a serving of arepa on the side, which can be considered the national snack of Venezuela. The restaurants that sell Mondongo in Venezuela are known as ‘areperas’, which focus mainly on cooking Arepas, but the mondongo dish and the arepa go strictly together in Venezuela. Many Venezuelans make it a priority to eat Mondongo early in the morning before they go to work or later in the night before they go out to party and drink.

Regardless if you’re eating Mondongo in Colombia or Puerto Rico, it is a hearty, fulfilling soup dish that has a ton of variety to it. You can mix and match different ingredients together and decide what kind of sides you would like to serve with your Mondongo. Wherever in the world you eat this dish, you should do so on an empty stomach due to how heavy it is. You won’t need to have any breakfast, lunch, or dinner if your only meal of the day happens to be a big bowl of Mondongo. Enjoy responsibly or you may risk a stomachache. Buen provecho!