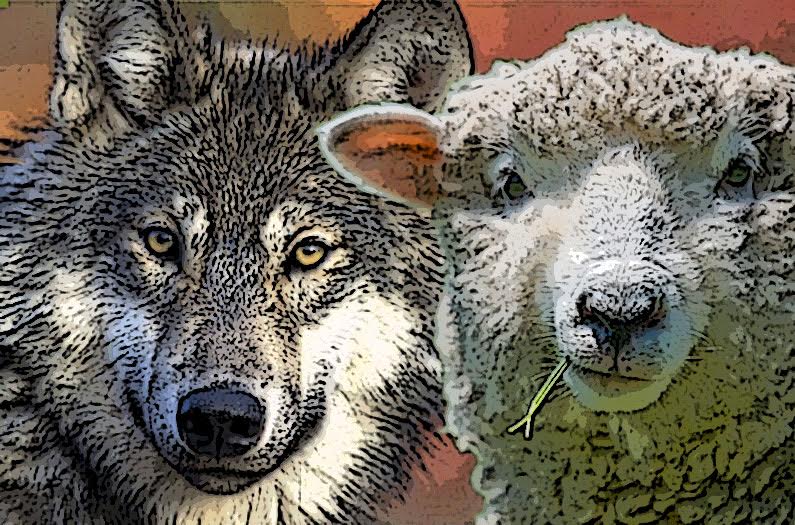 We often like to think of ourselves as ‘introverts’ and extroverts’ in terms of our social makeup in how we act socially and how we get along with others. However, I like to think of another spectrum for which deserves some thought and introspection. Both of these classifications are not anything new, but I would like to put my own personal spin on what they represent, the good and the bad characteristics, and how these two personality types interact with other people.

I fundamentally believe that any person could be classified as having both character types with the extremes representing one or the other. I’d like you as the reader to figure out by the end of this article whether you are a wolf or a sheep? How did you come to that conclusion? and are you happy with this classification or wanting to resolve to change yourself?

When you first think of a ‘wolf’, you may think of the animal itself and how it can be dangerous, unpredictable, and fast. However, a wolf can also be thought of as cunning, loyal, and a team player. The wolf is not afraid to go it alone, sometimes for months at a time, while he or she is also comfortable with the pack where there is strength in numbers. The wolf can survive both on its own and in a group. The wolf adds value to the group but is able to self-sustain itself when it needs to.

If you see yourself as a ‘wolf’ kind of person, you take other people’s opinions into consideration, but you are not afraid to strike it out on your own. You don’t go along with the herd or the group all of the time when they are not of the same opinion or going in the same direction as you. You are an independent, reliable, and courageous person who is not afraid to go it alone even when it doesn’t please your tribe. At its extreme, being a ‘wolf’ can lead you to be a loner and cause you pain as you are no longer able to rely on your wolf pack for help or assistance. You may shun others with your actions and your opinions much to your detriment. A ‘wolf’ knows how to push his or herself to the limits, but it may bite off more than it can chew.

In a world where it is difficult and sometimes detrimental to go against the pack, a ‘wolf’ can decide to do so in an effort to sustain itself against the odds. Being a wolf is risky, but it has greater highs and lower lows. The risk is higher but so are the rewards. The wolf prides itself on being able to integrate into a community if necessary but it solely does not need it to survive like other animals. Any person can be a ‘wolf’, but it depends how far they push themselves physically and mentally, and how far they are willing to stray from the pack. A wolf can handle being a loner, being unpopular, and being cast out if it means keeping its morals, goals, and ambitions ahead of itself.

In contrast to the hard-headed yet cunning wolf, the ‘sheep’ is more timid, cautious, and relies on its flock for everything from where to eat, how to look, and where to go. The ‘sheep’ is unable to voice a contrasting opinion or forge another direction because as an animal, it would be largely left defenseless from predators, including a pack of wolves, if it is not careful.

The ‘sheep’ goes along with all of the other sheep in the flock not because he or she wants to but because he or she needs to. As an animal and a personality type, it puts the group’s needs above its own much to its detriment and making it weaker in the process. A sheep is not a risk-taker and is more about the collective group than being its own individual. While the life of a sheep may be comfortable and cozy, it is likely not to push itself to the limits and find out what he or she is truly capable of. Sometimes, it’s necessary to act, be, and think independently and a sheep is not able to do any of these things. A person can be a ‘sheep’ when they are not able to go against the group to develop themselves and to gain inner confidence. While it’s good to be in the flock or to be part of the pack, to do so all of the time much to your personal detriment is neither productive nor desirable. While sheep and wolves may be together, only the former has to do so some of the time while wolves have a choice to be on their own independent of the pack.

After thinking about these two personality types through the guise of these animals, it is my belief that any person can fit on the spectrum from the huddled sheep to the running wolf. Both personality types like ‘introverted’ and ‘extroverted’ have their innate positives and negatives. However, you have to decide for yourself when it is best to act like the ‘sheep’ or to be the ‘wolf’. There are those people out there who want to be 100% wolf or 100% sheep but you may not have this end up being a good decision for yourself. Life is about balance and you have to decide whether it’s best at times to be the ‘wolf’ and when it’s time to act like the ‘sheep.’ I find that to be 100% like each animal’s characteristics can lead to alienation, disenchantment, and outright dissatisfaction.

There are times in life where you have to be independent of others, believing in your goals when no one else does, and having opinions that the group does not share leading to positive ostracism. You have to be the ‘wolf’ when these times happen because you will be better off for it and be a more enlightened person as a result. Also, there are times when you have work with others well as a constructive team and put your beliefs and opinions on the back-burner when you can’t achieve and do things on your own.

‘Sheep’ rely upon strength in numbers and being part of a strong community that can support and back each other up when being independent could lead to isolation, despondency, and even death. Being independent v. being part of the group is a constant struggle in one’s life and you have to decide for yourself when it’s best to strike it out on your own or to be part of a larger group (family, friends, colleagues, schoolmates), etc. in order to get ahead.

You should ask yourself after reading these two descriptions of these popularly known animals whether your own personality and characteristics are more in line with the ‘wolf’ or with the ‘sheep.’ There’s nothing wrong with having a mix of both or being aligned with one or the other, but you have to do some introspection to decide whether you are a wolf or a sheep. A person with no defined personality traits that they are aware of is too easily manipulated and too easily controlled. Please be sure to always think, act, and do for yourself but to also respect your tribe and your group if they are supportive of you, your goals, and your beliefs. Now, “Are you a wolf or a sheep?” Decide for yourself.