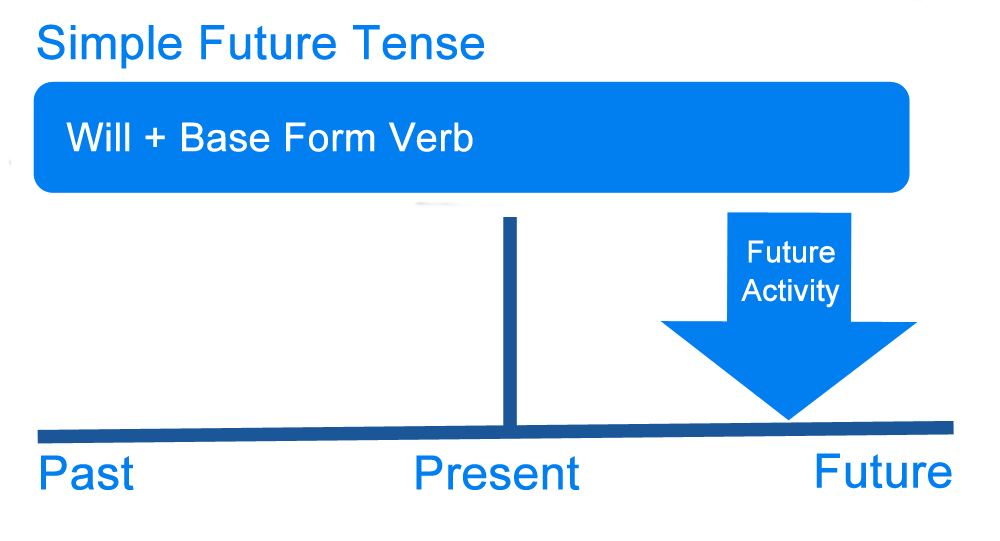 In the past couple of editions of the ‘English Corner’, we’ve gone from the past to the present in terms of understanding and using the grammar structures that encompass these lengths of time. Now, we’re going to take our knowledge of English grammar into the future by going over and analyzing the ‘Simple Future’ tense. If you have a good basis of understanding when it comes to the past tense and the present tense, you should have no trouble with the future tense, especially the ‘simple’ version of the tense to start out with.

As always in the English language, we are going to want to start our sentence even in the simple future tense with the ‘subject’ at the beginning whether it is ‘I, You, They, We, He / She, It, etc. After the subject comes the auxiliary verb first which in this case you are going to put the future indicator ‘will’ right after the subject. Once you have the subject and the auxiliary verb set up, you can then put the main verb after that to fill out the third part of the sentence. Lastly, you’re going to finish the sentence with the action taking place and the object that is being referred to. Overall, the structure of a ‘simple future’ tense sentence should be ‘subject + auxiliary verb + main verb + action (object).

Here are a few examples to consider:

Sometimes, you’re going to want to make the simple future tense from its’ usual, positive form into the negative form which isn’t that much different except for one important difference. In order to make this grammar tense negative, you’re going to want to put the word ‘not’ between the auxiliary verb, which is the word ‘will’ and the main verb, which could be any number of verbs to express what you would like to be doing in the future.

If you want to go ahead and put the simple future tense into the question form, you’re going to want to exchange the usual placement of the subject for the auxiliary verb and switch them around with each other. In order to get a better understanding of the negative and question forms of the simple future tense, let us take a look at some examples that I have listed below:

Another thing to be aware of when it comes to the simple future tense is that you don’t need to use ‘will’ in the auxiliary verb part of the sentence all of the time. To express the future, you can exchange ‘will’ for ‘shall’ in order to get your point across.

Beyond just writing correctly in the simple future tense, when it comes to the spoken form, you can be much more informal with your choice of words. If you’re speaking to someone about the future, you’re going to want to contract both the subject and the auxiliary verb. You should push them together to become one word with the help of a well-placed apostrophe. You don’t have to speak or write in the contracted form but you can do so if you’re being informal and don’t feel the need to sound everything out for the other person or for the audience.

I’ll be sure to call you back after I’m done cooking.

You’ll need more time to study tonight since your exam is tomorrow.

In addition to contracting the positive form, you can also contract the negative form of ‘will’ with a slight difference in its’ wording. Instead of ‘will’ being contracted into ‘I’ll’, it becomes something else entirely.

We won’t stop the strike until our demands are met.

They won’t stop playing their awful music in the house next door.

Now that we have the structure of the simple present tense down to a science, let’s focus on the ways in which we can use this grammar form to the best of our ability.

More often than not, the main reason we choose to use the simple future tense is because we have no plans or obligations ahead of us so we can choose to do things spontaneously instead without putting much thought into it. Sometimes, as human beings, we do things without much planning so using ‘will’ in a sentence to express a spontaneous action is quite useful. The decision that you make or the action that you take can occur right away or within a short notice.

It should be kept in mind that there are a few known exceptions where ‘will’ is actually the main verb in a sentence and the auxiliary verb is another word that can take its’ place to express a future action to take place. The primary example of this exception is the word ‘think’, which can exchange places with ‘will’ to become the auxiliary verb and to express what the subject may do in the future with regards to their plans or obligations.

Another main use of the simple future tense is to try and predict the future. While these predictions aren’t foolproof and could end up being wrong, we try to be as certain as possible before using ‘will’ in a sentence to prove its’ inevitability. As human beings, we are prone to make mistakes but we try to predict the future as if it is set in stone.

Lastly, without changing the structure of the simple future tense, you can add the verb ‘to be’ after the important auxiliary verb ‘will’ to create some additional sentences with the same grammatical form. It is not necessary to use ‘be’ in a sentence with ‘will’ but it can help you to create additional examples such as the ones below.

Oftentimes, you can use ‘going to’, the present progressive (continuous) tense to express what plans or actions you have for the future. However, for now and for the next edition of ‘English Corner’, we are going to continue to focus on how to use ‘will’ to express the future including its’ continuous form, which we will review next month. Until then, keep studying your English and please let me know if you have any questions or comments!