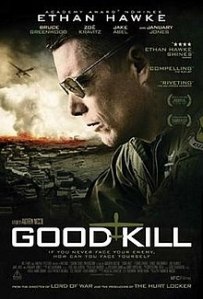 Good Kill is an excellent drama/thriller film that highlights the ethics and the cost involving drone warfare and how it can affect the servicemen and women who have to pull the trigger and live with the consequences. Starring Ethan Hawke, this film is a deep and probing look at how warfare conducted from thousands of miles away can still leave a lasting imprint on those who have a role in it even when they are not anywhere near the battlefield.

The film highlights correctly how while drone strikes may carry less collateral damage to civilian lives, there will always be the chance for the loss of innocent life and families being destroyed. Whether that’s an errant missile crashing into a wedding party or a group of children running by a targeted building within seconds of a missile being launched and getting caught in the crossfire, death from the skies will not only affect terrorists, but women and children too. Because drone strikes are less costly to governments and militaries, the rules of engagement can sometimes be abused to focus too often on low-level targets, who pose some actionable threat, but who could also be captured for intelligence purposes. A lack of international norms and standards regarding drone warfare leads to serious consequences in terms of possible abuse by governments who overuse it on secondary targets.

Airmen and women such as Ethan Hawke’s character and his colleagues, who conduct drone strikes, are shown to suffer from symptoms of post-traumatic stress disorder because they get to know their targets, see how they live, and struggle with having the power of death over them. High-resolution surveillance makes the act of killing personal despite the fact that these servicemen are thousands of miles away. When a drone strike goes wrong and innocent civilians are killed, it leaves a long-lasting psychological effect on the military personnel involved.

They may not see their victims when they are flying an F-16, but they are aware of what collateral damage is when they see the dead bodies of women, children being shown on the high definition screen. Military service members do not last long as drone pilots due to the immense mental strain placed on them especially when they did not sign-up for conducting warfare with a joystick. Alcoholism, depression, and family problems have occurred due to pilots being asked to conduct drone strikes in the name of national security. All of these issues are highlighted in Good Kill making it more than just your average film about war, but also about an excellent look on how the human condition is affected from holding life or death decisions over those who never see it coming. 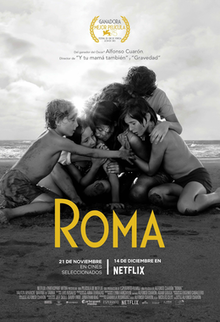 Roma is more than just your average film about a family. It is excellent in its scope and ambition in covering a tumultuous period in Mexican history and for highlighting the issues of family, race, and class within the larger society. What I enjoyed most about this film was that it felt personal and it is based off of the childhood of the director Alfonso Cuaron. The way the story unfolds feels as if it has been lived out before.

Cuaron’s work and that of his film crew that was done with the cinematography, film editing, and screenplay is extremely impressive and goes to show the audience just how film is another form of human artwork that can display beauty, meaning, and pure emotion.

Amidst the story of this family are real-life events in Mexican history that overlap with the film without overwhelming the intimacy of the story being told. For example, The Corpus Christi Massacre or “El Halconazo” in 1971 are intertwined with Cleo’s search for a crib for his newborn baby to be.

Nobody in this film is perfect and true human error of both behavior and character are laid bare. Amongst the flawed characters in this film are redemptive qualities about them and how they fight and struggle to overcome betrayal, disappointments, and tragedy. The film is gripping in that it is about real life and there is no sugarcoating. In Roma, no one is immune from setbacks and struggles, and that is what makes the audience invests in the story being told even more.

Compared to many other films that I have seen, few have touched me more on an emotional level than Roma. The realistic dialogue, the set pieces, the chain of events, and the character development all lend to its longevity as one of the best films of the decade. If you have a Netflix subscription, do yourself a favor and watch Roma. You won’t regret the chance to view this pure work of art and I would not be surprised if it sweeps the awards at the Oscars. It is that good of a film and a noteworthy achievement by director Alfonso Cuaron. 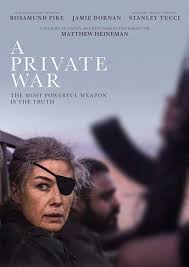 This is a biographical film without feeling overwhelming or too much tied up in the protagonist. This film does a good job in covering the life of the deceased war correspondent, Marie Colvin, who reported from multiple war zones over two decades including Sri Lanka, Iraq, Libya, Syria. Marie was a fearless and bold reporter who did the under-appreciated work of reporting the facts on the ground when it came to what was going on in these war zones.

The film portrays her as someone who battled the terrible things that she witnessed and the horrors that she could not avoid. She struggled with her dependency on alcohol, cigarettes, was divorced twice and also had her bouts with post-traumatic stress disorder (PTSD) as many war correspondents deal with when they return home from a war zone. Rosamund Pike, the lead actress in A Private War does an incredible job in accurately portraying who Marie Colvin was in how she mimics both her mannerisms and her speaking style throughout the film’s entirety.

Despite losing an eye, suffering from PTSD, and struggling with maintaining her friendships and relationships away from the battlefield, Mrs. Colvin dedicated her life to reporting the truth and the facts from war zones around the world so that everyone would else would know the costs of war.

While she was afraid and while she was fearful, she had the courage to press on and do her duty in informing the public on what was going on. While she was killed during the siege of Homs, Syria, her memory lives on with this film and the work that she did for two decades in holding the powerful accountable for the wars that they started. In an era where journalists are being denigrated and dismissed with increasing impunity, it’s refreshing to see a film that pays tribute to a war correspondent who gave her life to the cause of reporting the facts so that people would be more informed on what was going on and to also care about why it was happening.