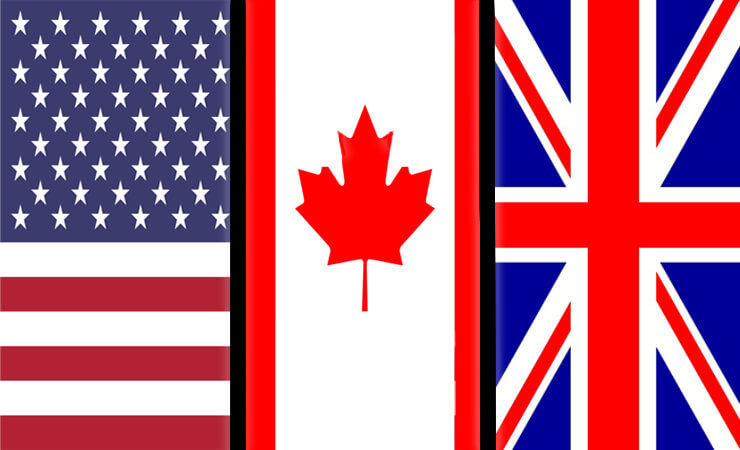 Part of the beauty of the English language is the diversity amongst the countries where it is the primary language of communication. Like many other languages around the world, there are different accents, words, and expressions unique to that particular country where it is the primary language. There’s a popular saying that goes: “The United States and the United Kingdom are two nations separated by a common language.” It is a funny result of the quirks, changes, and adaptations that come with being separated by a natural border such as an ocean or a man-made border. However, it goes to show you that a language can be molded over time by a culture leading towards small yet noticeable differences in the words we use, the phrases we say, and even the way we spell individual words.

In this article, I want to focus on the different words and spelling that while similar are not the same between the U.S., U.K., and Canada. I believe an English language learner should be familiar with these differences in spelling and vocabulary to build an even richer understanding of this language and how it can differ by country. While Australia, Ireland, New Zealand, and South Africa also have their own differences from the United Kingdom, I find that the former colonies of Great Britain have followed the UK in terms of the spelling and vocabulary used.

Canada tends to be similar in some ways to the US and in other ways similar to the UK so I would call it a mixture of the two countries, and you will see why this is the case in a chart detailing both these similarities and differences. I will analyze the chart a little bit and ask you to think about other words and phrases unique to these three countries and how you have come across them in your own studies or travels.

From this ‘International English Spelling Chart’, we can see some slight changes to the spelling of multiple words with each country being different from each other (color-colour, center, centre, defense-defence). As you can also make out from the spelling chart, there are certain words that the US is alone with using such as ‘gray’ compared to ‘grey’, which is backed up by Canada, the UK, and Australia. However, the UK is alone with using ‘globalisation’ whereas you have Canada and the US using ‘globalization’ with the change from ‘s’ to ‘z’ instead. This is also the case with ‘aluminum’ (Canada/US) compared to ‘aluminium’ for the UK.

With the exception of the word ‘concert programme’, Australia and New Zealand (not featured) are totally aligned with the United Kingdom on each word presented above in terms of spelling highlighting their common history together and cultural heritage ties.

Most of these spelling changes are quite minor in difference and usually are either an addition of a letter such as a ‘u’ (color (USA) –> colour (UK)), or with an ‘i’ (aluminum (USA) –> aluminium (UK). They can also involve simply switching one letter in the word to another as we see with defence (UK) –> defense (US) with ‘c’ becoming an ‘s’ or globalization (USA) –> globalisation (UK) with ‘z’ becoming an ‘s’ with that change. Besides adding a letter to the word or changing one letter for another, these spelling changes among English of different variants according to country origin are quite minor. Although spelling changes are few and far between, differences in vocabulary words are greater when you compare the U.S. and the U.K. especially.

While the American / Canadian English tend to use the same words in a common vocabulary, British and American English words differ fundamentally in terms of word meanings and word usage. Still though, given the expansive list above, you realize just how rich and varied the English language is. Even if you are an American or if you are British, learning the dialect of each other’s country may require a bit of time and translation work. Despite sharing the same language, we don’t always share the same words, or the same meaning tot those words. It is important for both native and non-native speakers to familiarize yourself with the different dialects of the English language even if you’re not living in that country.

If you are planning to travel to different countries of the English-speaking world from Toronto to New York or from Los Angeles to Sydney, you should take the time to study the vocabulary sheets to know the difference in word usage as well as the slight spelling changes from other words that the charts above cite. When you adapt your English language skills to the local dialects, the people in those towns and cities will be quite impressed and it will make it a more fun trip or stay for you to use those common expressions or slang that will help you interact with others and even make a new friend. Please take some time to review these charts I have shared with you and try to use these different vocabulary words from each country in written sentences to help you understand. Don’t be shy also in pronouncing each one and being aware that while the meaning is the same, the word used by country is different.

I would just ask you to remember though not to get them confused and end up saying ‘chips’ in America when you meant ‘fries’ while ordering food or when you ask the kind British police officer for help in opening the ‘trunk’ instead of the ‘boot’. Those accidental cultural faux pas can be hard to avoid especially when you’re not from that country originally which is why it’s important to learn about and study these spelling and vocabulary distinctions that make the English language such a diverse and rich one in the world.