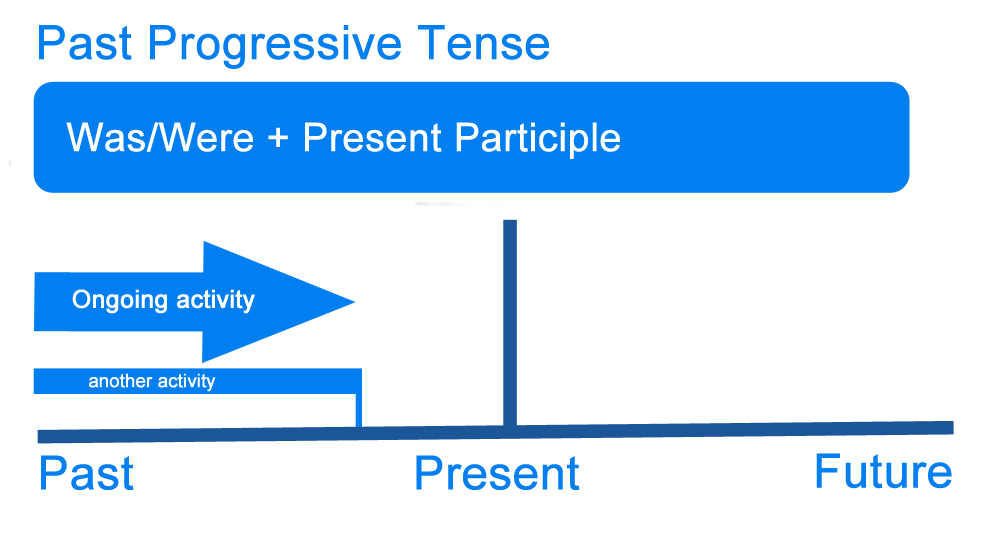 Now that we have covered both the Simple Past Tense and the Present Progressive tense in the past few months, we will be able to move forward with our summary and analysis of this month’s ‘English Corner’ focusing on the underrated yet important ‘Past Progressive Tense.’ If you want to express your sentiments or observations in English regarding something that was happening in the past as a continuous action or movement with no clear end date, you’re going to want to utilize the past progressive tense in order to make the grammar of your sentence work properly.

While not as popular as the simple past tense, it’s an important concept to grasp in order to fully understand the past tense as a whole. Both the simple and progressive forms of the past tense tend to overlap quite a bit, sometimes in the same sentence or paragraph, making it necessary to know when and where to use both or either grammar tense to talk about actions and happenings in the past. Compared to most grammar tenses that you will learn in the course of your English studies, the past progressive tense tends to be one of the simplest and easiest to grasp.

The actual main verb is going to be in its’ present progressive form with –ing being added to the end of each verb after ‘was’ or ‘were’ that will make it a past progressive tense sentence. It is very important that you follow this structure, otherwise, your sentence won’t make much grammatical sense and you’ll need to re-order the structure in order for your sentence to be understood by the reader. Don’t stress about it if you don’t get the concept at first.

Here are some examples with the basic form of the past progressive tense using ‘was’ or ‘were’:

If you are thinking of making the past progressive tense negative, all you need to do is to put the word ‘not’ between the ‘to be’ verb in the past form and the actual action that was taking place at the time. If you’re struggling with forming a sentence by using the past progressive tense, you should look to these examples in order to help you in the future as an English student.

1) John lost his wallet while he was dancing salsa at the club.

2) Jane found her keys while she was watching her favorite television show.

3) We ate a lot of tapas dishes while the bands were playing Spanish music at the restaurant.

As highlighted in the examples above, the simple past tense and the past progressive tenses can be used together in the same sentence without any problems. However, it is possible to use them in separate sentences as well, which will make the sentence a lot simple to create. Be aware that the word ‘while’ is a way to connect a sentence together that uses the two forms of the past tense together in a seamless manner.

Overall, the past progressive tense is a lot simpler and straightforward when compared to other grammar tenses such as the simple past tense. As long as you remember the rules, study the examples, and practice writing sentences using this verb form on your own, you should be just fine. As always, if you have any questions or comments, please leave a comment for me and I would be happy to answer them for you. Good luck and look out for next month’s English corner!