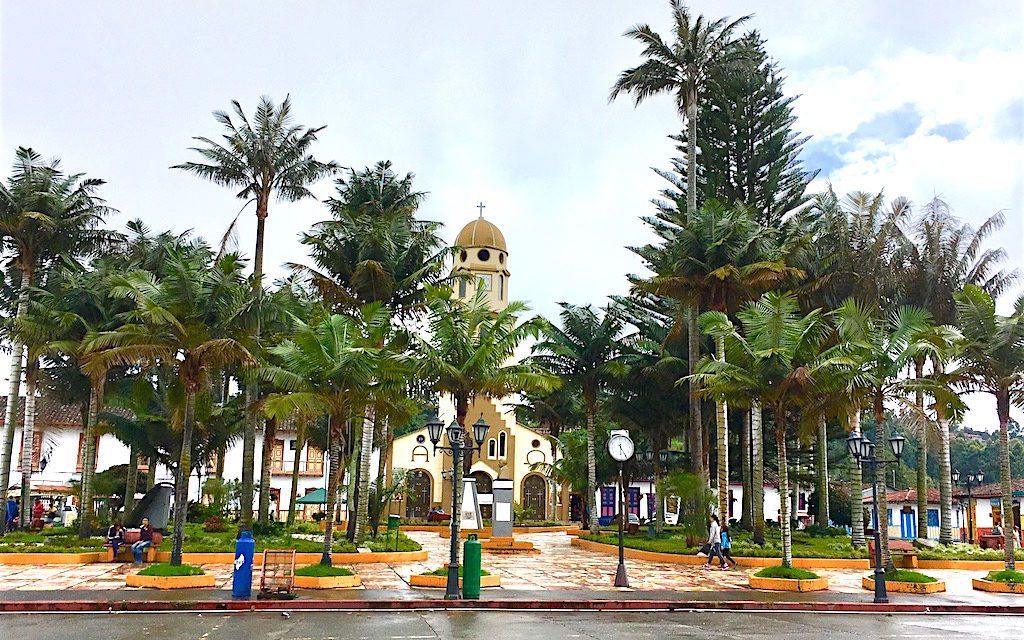 During my visit to Salento, Colombia, a beautiful town located in the foothills below the Andes Mountains and adjacent to the famous Cocora Valley, I picked up on a slogan that I found very endearing and memorable. “Hay vida en las calles” was posted on an advertisement on one of the vendors there who was dishing out ice cream, snacks, and other goodies. “Hay vida en las calles” translates to the English language as “There is life in the streets” and I found that to be a very positive sign and one that gets people out of their homes and into the parks, squares, and plazas where the basis of all community life is formed. While life in the streets cannot be found everywhere, I found this prevalent attitude consistent in many towns and cities during my travels in Latin America.

The emphasis on communal spaces and public gathering places is something I really admire about Latin culture and I find it to be a healthy feature of any society, which has strong communities and families. Being able to leave your homes every now and then to walk five minutes away to be in a public park or a town square should be natural and available to more and more of us.

As is well known in psychology and sociology, Human beings are social creatures and we want to be around other people even after we have had some alone time. In order to do so, responsible local, state, and national governments should provide that to their peoples in order to build more trusting and kind societies. In societies where people are isolated, lonely, and without opportunities to meet people and build new friendships, problems related to anxiety, depression, and even violence are likely to rise.

In countries such as the United States and other Western countries, statistics related to anxiety, depression, and loneliness are rising and part of the reason I think for the rise in these issues is related to not being able to gather and socialize in a public place. The atomization related to suburban living, the lack of public transportation options, and the decline of shopping centers all help to contribute to this rise in loneliness. I mention the closing of shopping malls because due to technology giants like Amazon, small businesses and large companies alike are closing their doors causing people to order anything from food to clothes to Amazon Echo from their homes.

While shopping malls and outlet stores aren’t an optimal way to build a sense of community, they still brought people together and were a place to hang out. The question remains regarding how will we replace these stores, strip malls, and outlet centers if they all go out of business? A revitalization of public places from small towns to big cities will not just be a prudent step forward but help societies deal with rising anxiety and loneliness rates. There should be life in the streets.

Whose responsibility should it be to encourage this kind of ‘life in the streets’? I believe it’s the local government combined with local businesses who can really make it work. Also, local community groups and organizations can play a big role in making sure everybody feels welcome and to promote activities, discussion groups, and issues in the community that need to be resolved. The average citizen living in the town or city can contribute to by hosting ‘block parties’ or contributing food or drinks. We ask our taxes to pay for roads, schools, and parks, but why not also a community gathering place, indoors or outdoors, where people can be social, discuss issues, and make new friends.

Without investing in our citizens by providing a ‘public square’, we are really selling ourselves short and it could hurt the fabric of our communities, towns, and cities in the long run. Without a way for people to interact and socialize with each other for free and without needing to buy anything, society as a whole can really benefit. It may sound like a ‘utopian’ idea to some but I think it makes a lot of sense in terms of the potential benefits to people’s mental health.

When I was in Salento, Colombia, for example, there were numerous food vendors, there was live music, and people were chatting with each other on benches. Children were playing in a nearby playground and the air was fresh and clean. The noise of the cars and the buses was off in the distance and it was a sea of calm where there were plentiful trees, flowers, and you could hear the birds chirping. People need that kind of space to gather, talk, listen to music, eat food, and watch their children play peacefully.

In my travels through Latin America in the past few years, I have seen this in multiple towns and cities where there is an emphasis on using the public squares for the public’s benefit. While this may not be a universal thing across the entire region, it is a priority here and one that I really appreciate coming from a culture where these gatherings are in decline. The good news should be that with greater effort and investment, we can bring the public spaces back again in the United States and elsewhere.

Further automation and loss of jobs in the retail and manufacturing sector is a tragedy and one worth acknowledging. My hope is that the loss of these retail and commercial spaces can be put to some good use and even lead to different kinds of jobs to take root, ones that are more social and that benefit people more, especially young children and the elderly. Being able to revitalize certain neighborhoods with greener public spacers where people can gather, eat, play, talk, and even dance would help curb the loneliness epidemic that we are seeing in Western societies. If there is life in the streets, people will show up and they will be better for it.

Part of the beauty of travel is seeing how other cultures value family and community life and make it a high priority. I believe that you can take these positive values from other cultures and place them within your own. It must involve buy-in though from the people themselves and they have to feel that it was the next step forward in improving their community. With the rise of automation and the closing of large shopping centers, we may be at the point in time where we can turn these empty buildings and useless parking lots into real gathering places in the future.

Without social interaction and a sense of community, people will suffer as a result mentally. This has been shown in many studies and in many surveys. I think it is part of who we are as social animals and being isolated in our homes and in our cars for 90% of the day will not make us healthier. For what I saw in Salento, Colombia a few years ago and what I have seen in other towns in Latin America, placing a high value on social life within these communities will make people feel a sense of togetherness and cohesion. A greater emphasis on community gatherings and social spaces would create a large ripple effect that would drastically improve the greater society, the country you’re in, and the world.