“One thing I have noticed recently is that some people have a hard time giving a simple apology when they mess up, are rude to others, or don’t have the emotional intelligence to realize when they were in the wrong about something. Now, this is not a good habit to develop as an adult and one that makes you appear to be childish more so than any other negative trait that you could display.” 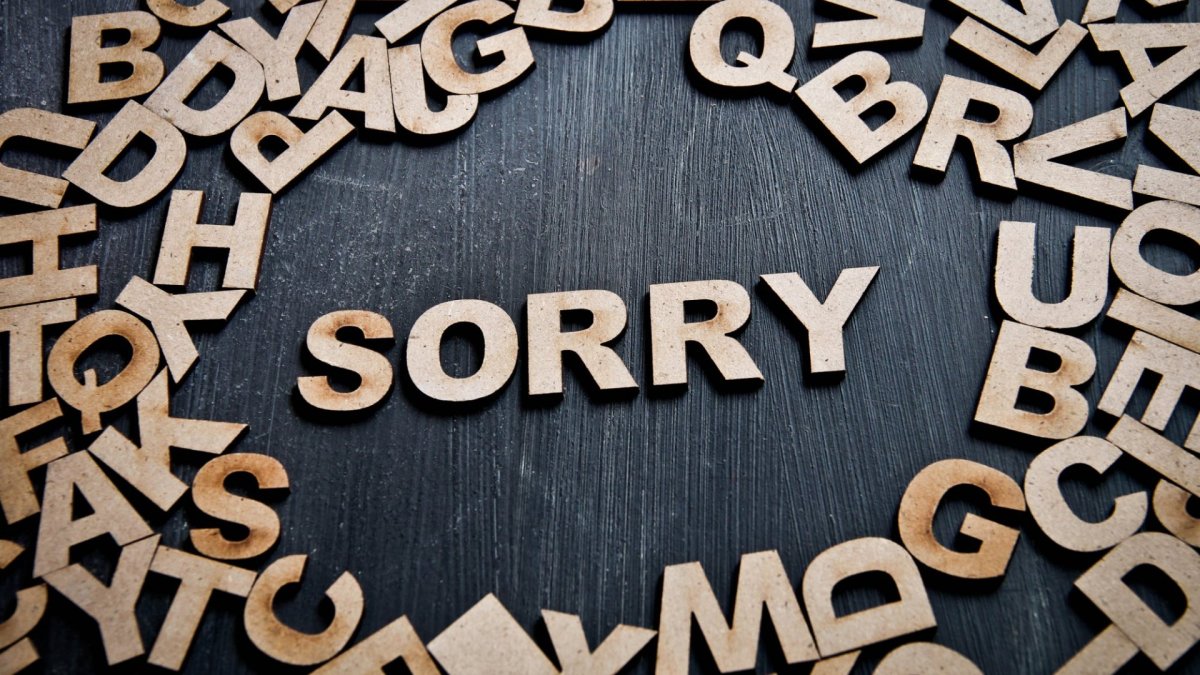 One thing I have noticed recently is that some people have a hard time giving a simple apology when they mess up, are rude to others, or don’t have the emotional intelligence to realize when they were in the wrong about something. Now, this is not a good habit to develop as an adult and one that makes you appear to be childish more so than any other negative trait that you could display. Learning how to apologize is done when we are children and our parents tell us to always ‘say sorry’ and to learn to be nice to others.

‘Sorry’ is one of the golden words we learn are key to our day-to-day lives. It doesn’t take much to do and will cost you nothing. The fact that many adults don’t know how to do this today in our society is a worrisome sign of how personal relations have decayed compared to previous times. Some people choose to dance around the offense and not acknowledge it while others refuse to take responsibility for their actions which leads to the person who was offended feeling aggrieved and holding a grudge against that person for longer than they should need to.

The old adage of ‘you forgive but you don’t forget’ is not a pretty one but if there is no apology from that person who committed the offense, the other person may learn to forgive them but they will not forget that there was no apology rendered from the other person. I do not endorse holding a long-lasting grudge against other people but being rude, saying bad things about others, and overall not being a respectful person will cause you to lose many different relationships with others. Most adults do not know want to associate with somebody who refuses to apologize or does not take responsibility for their actions.

I believe that with social media and how often we do not see the other person’s face and their body language that we feel comfortable getting away with rude behavior and it has led to that kind of behavior spilling over into real life interactions. A lack of an apology can be due to a person’s own narcissistic nature and to think that the rules like the ‘golden rule’ don’t apply to them and that they can ever do no wrong including causing harm or offense to other people.

The sign of a true mature adult is one who apologize and does so in a sincere manner. It is a heartfelt apology and is usually more than just a simple ‘sorry’ and then move on. If someone cannot even say ‘sorry’ or realize the hurt that they have caused, then they still have a lot of growing up to do and act more like a child or a teenager in an adult’s body than an adult themselves. The sad thing to see in society is when a 45 year old acts like a 15 year old or when a 75 year old acts like a 5 year old, which is often as the result of them not registering other people’s emotions or feelings, and thinking reflectively about their behavior, their tone of voice, and how their language was inappropriate.

The art of an apology is not as simple as it can be made out to be with just a quick ‘sorry’. Often in life, a simple ‘sorry’ does not cut it. I think it’s better to follow these steps to having a legitimate and heartfelt apology that will make the other person feel better and try to restart the relationship or improve it rather than letting it fester and causing the other person to dwell on your insult.

1. Acknowledge You Were Wrong

The first step for any good apology is to acknowledge to someone face-to-face if you can or over phone or email if you can’t see that person that you were wrong. Whether it was something you said or something you did or that you hurt their feelings, acknowledge the thing that caused the original offense, state how it wasn’t right for you to do that, and apologize in that way beyond a quick ‘sorry’. It’s as direct as “I was wrong to…”, “It was not right for me to…”, “You deserve an apology for…”

2. Remember the Incident and What You Took from It

When you acknowledge what you did and that it was wrong, it makes the other person feel like you remembered that it was not the right thing for them to do and that pain was caused. It also means remembering that certain feelings were hurt and that the other person realizes they could have done things different / not said anything at all / or watched what they have said better. Saying ‘sorry’ or apologizing without saying what the ‘sorry’ is for is not a good way to do an apology because you have to be specific regarding what the apology is for and what you did wrong if you caused offense.

3. Be Sincere and Don’t Rush It

How you say an apology is often more important than what you say in the apology. If you are rushing through it, only saying a one-word apology, and not even looking at the person or acknowledging their presence while saying it, then that is not a real apology. A real apology must be congruent with your body language and your eye contact and your tone of voice all on the same page together. You should give that person your full attention and not be checking your phone, reading your email, or have your attention generally elsewhere while doing the apology.

Also, not rushing it means it’s going to take more than a five second ‘sorry’ and move on, if you follow the previous two steps, a good apology will take as long as it needs to which could be anywhere from a minute to ten minutes depending upon what the other person has to say. Depending on the severity of the negative action, you want to give that person a chance to respond, to accept your apology, and to decide how your relationship with them is going to move forward. You cannot force an apology to move forward without the other person agreeing to it so make sure you are patient, forthcoming, and open to listening to what they have to say to you.

4. Be Open to a Change in the Relationship

Even with an apology, sometimes, that person is going to want to take a break from seeing you, hanging out with you, or being around. It can be hard to bring that relationship back to what it was when harsh words are exchanged or when negative actions happened between two people to cause the strife. You have to understand and accept what the other person does because they may not want to trust you again as much or recognize that you aren’t the person who they thought you were.

This may be a hard pill to swallow but you are likely going to have to spend some time away from that person, let them forgive you on their own timetable, and they will set the terms on if they see you again or not. It is possible they may never fully get over what you did and not want to be around you again at all. This is a harsh truth to face for most people but the least you can do is apologize and try to move on.

If that person chooses to accept your apology but not go out of their way to see you again then that is their right to do so and it is up to them how they want to conduct their interactions with you moving forward. As adults, people want to spend time with those people who treat them well, respect them, and are emotionally mature. If you can’t do that, it’s going to be tough to have friends or to be around other family members.

I write this article because too often today I have seen other adults refuse to apologize for being in the wrong and this can cascade throughout the rest of our society. There is a fundamental lack of accountability and also responsibility that starts with a failure to apologize sincerely. It takes real wisdom and maturity to apologize to someone, but it is necessary since we are all flawed and make mistakes.

A true adult owns up to these mistakes they made, apologizes for them to seek forgiveness, and accepts what the other person does in response without any future expectations on how the relationship can move forward. It begins with saying ‘you’re sorry’ but it does not end there and a good apology is more than saying ‘sorry.’ It means acknowledging what you did was wrong, being sincere about it, listening to the other person, and being open to a change in the relationship based on how they want to move forward with you in the future. That is the true art of an apology and one that I hope you will follow in your own life.

Join 353 other followers
Follow The Life and Times of Ben Weinberg on WordPress.com